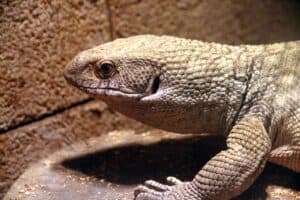 If you are a reptile lover you have no doubt heard of the Argentine Tegu and Savannah Monitor. They are certainly some of the most popular options when it comes to larger sized lizards. There are many debates as to which is better between the Argentine tegu vs the Savannah monitor. Hopefully, you will be able to get some insight into these amazing large-sized pet lizards.

The Argentine Tegu is a better option than the Savannah monitor for most people. Tegus are generally less aggressive, easier to tame, and require less food and a smaller area. The Savannah Monitor is an advanced lizard that is not always tame. It requires a slightly larger enclosure as well.

That said, it would seem to be a personal preference which is the better pet. In fact, the tegu and the savannah monitor make it on my list of top giant lizards to have as pets. There are many different factors when choosing a pet lizard. Let’s break this down a bit more.

When looking at the differences in these lizards, you need to start by asking yourself these questions:

The Tegu is a rather calm and peaceful lizard compared to many other lizards of similar size. This makes it better for first-time reptile owners compared to the Savannah Monitor. The Monitor has a very heavy tale which it loves to whip around especially when it gets mad.

Both the tegu and the Savannah monitor can be tame and peaceful pets. However, I would give the edge to the Argentine tegu when it comes to temperament.

Clint from Clint’s Reptiles has a great video comparing the Argentine tegu and Savannah monitor head to head.

The Argentine Tegu as a Pet

There are many factors that make an Argentine Tegu a better pet than a Savannah Monitor, such as:

The Tegu has a wide diet variety. A few of the things they can eat are:

The adult Argentine Tegu can eat about three times per week. This is similar for Savannah Monitors but the Tegus eat less food. Tegus do require an enclosure that is roughly 8 feet long, 4 feet wide, and 4 feet long. If you are a crafty person, they are easy to build.

The Savannah Monitor as a Pet

The Savannah Monitor is a complicated lizard compared to the Argentine Tegu. They can be good pets but are quite feisty and can be hard to tame. They rather enjoy whipping their large, heavy tails around or giving you a quick bite that could lead to stitches.

Monitors are much more active and like to try to escape. It is important to have a closed-off area if you want to let them run around.

Their diet is much more restricted than a Tegu, and they do not eat fruit or vegetables. The diet must be full of protein. Here are a few examples of acceptable food for Savannah Monitors:

The Savannah Monitor can eat a lot more than the Tegu. They need low-fat protein three days a week and gut-loaded bugs five days a week. They also need calcium powder added to their food. It is important to watch how much you feed them because they will eat non stop if you allow them to.

Monitors require a bigger enclosure. It must be a minimum of eight feet by six feet. The basking spot must be much larger and they also require a good depth of substrate to burrow and chase their food in.

They can not handle temperature change as well as the Tegu so it is important to keep their home the proper temperatures. You can do this by using a reptile cage temperature controller. Be sure to get the removable one so you can check the temperature and humidity throughout the entire enclosure.

The cost of buying and keeping an Argentine Tegu is quite similar to a Savannah Monitor. Below is a table to compare the two lizards.

Getting a pet lizard can be exciting. Before you get one, you should make sure that you can care for them properly.

Lizards need certain temperatures to survive. Plenty of heating lamps or a strong one should be placed in the basking area and at least one should be in the other area of the cage. They both need a few hiding houses and a damp house to keep cool in.

Both the Argentine Tegu and the Savannah Monitor need UVB lighting to mimic the temperatures of the sun. This also gives them Vitamin D. Vitamin D and Calcium are a very important part of keeping your pet Tegu or Monitor. If they lack these two vitamins in their diet, they are prone to bone disease.

Both tegus and monitors are at risk for certain diseases. That said, Savannah Monitors are generally more prone to diseases than Tegus.

These diseases can rack up a hefty veterinarian bill. On the other hand, Argentine Tegus are less susceptible to illnesses and disease. This makes them better as they will not have so many visits to the expensive, exotic veterinarian.

So Which Is Better Between The Tegu And Savannah Monitor?

Considering all of this information we have gone over, the conclusion is the Argentine Tegu is better for most pet owners. It is considered one of the gentle giants in the lizard world and an ideal pet reptile if you are looking to get into keeping large lizards.

That said, they are both very large lizards that are not the best choice for first-time owners. If you have never owned a lizard but are looking to find a choice that is not too small I would suggest going for a bearded dragon or blue-tongued skink.

Tegus are more expensive in the beginning, but easier on the pockets in the long run, especially with their hibernation period. They love to be pet and scratched. Savannah Monitors are not so much into that. They would rather explore their territory.

Both of these lizards can live very long healthy lives if they are taken care of properly. Fifteen to twenty years is a big commitment so make sure you have the time and money to give your reptile friend the best life they can have.

link to Are Komodo Dragons Venomous or Poisonous?

Many textbooks, studies, and articles on the Komodo dragons' toxicity contain out-of-date information that has recently been proven false. Newer studies prove that this new theory is correct, and...

Rattlesnakes are one of the most common snakes and inhabit a wide range of territory. People often fear rattlesnakes and some people are even afraid of being eaten by one. However, do rattlesnakes...

This site is a participant in the Amazon Services LLC Associates Program, an affiliate advertising program designed to provide a means for sites to earn advertising fees by advertising and linking to Amazon.com. We are compensated for referring traffic and business to Amazon and other companies linked to on this site.